Through the eyes of: Enora: The other Mauritius !

A rainy day at the beach is not the only situation that makes for a frustrated foreigner in Mauritius. For my part, the indicators are elsewhere, where there precisely is no beach but it is still Mauritius. I know there is plenty to experience, to grasp, to relate to history, or to simply see because there is so much beauty worth allowing oneself to appreciate.

So, when the best guide I could find suggested a cruise in Mahébourg and its surroundings, I left my adopted West Coast hometown and off I went on this special crusade. The South East would be mine and no one else’s!

The museum of Mahébourg opened its gate to welcome us for a first, typical conquest. And yet this visit provides benefits for the rest of the trip while one can enjoy the unique atmosphere of old colonial houses. This statement cannot be concluded without mentioning the old passenger wagon, long awaiting an overdue renovation, a rare relic of the time when trains crisscrossed the island.

Walking along the exterior wall of the museum’s beautiful garden just after the exit, a small path led us to a clearing overlooking a river, the Nativ Lodge. The place was bright, serene and isolated. I felt blessed. A little further on, while entering Mahebourg, we came to a new stop in search of an old wash house. Made of lava stone, huge and in perfect condition, it seemed to be brushed aside. I was appealed by its size and the fact that it was right next to the river because I remembered old photos of women doing laundry directly in the river. This particular wash house had an “official” feel to it though. I learnt that this was the spot where war officials washed their uniforms!

We then moved deeper into the old village of Mahébourg which was left unchanged and where the quietly flourishing neighborhood life could still be felt. The esplanade offered a magnificent view of the tiny island of Mouchoir Rouge (literally, Red Handkerchief) as well as of the East Coast which we rode along to reach La Falaise Rouge (literally, The Red Cliff). As is always the case in Mauritius, what is unique is subtly different, and the color red, like all colors, does not look like any other red you would find. 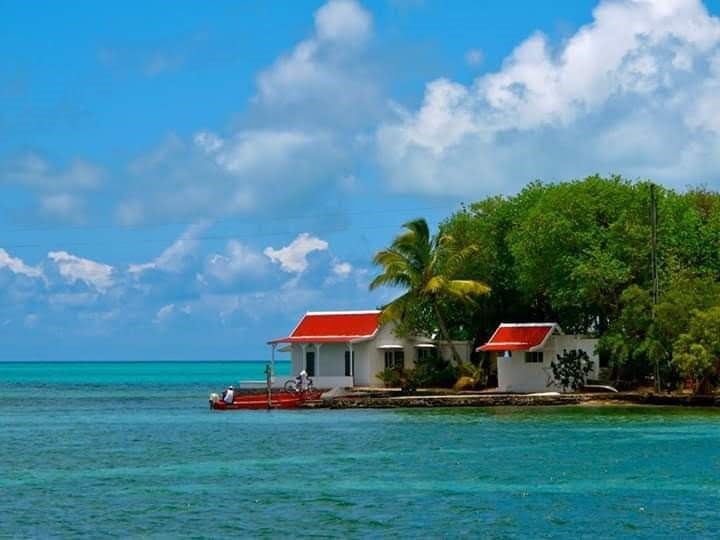 Our next stop was at an open-air theater, where our curiosity was aroused by an old stone construction whose origin we were trying to find. We speculated on various possibilities but were mistaken: this nice looking little building was actually used to store gunpowder. The roof, harmonious and round in shape, should have tipped us off, since it is typical of these constructions in order to limit the impact of a possible explosion.

Our curiosity was gratified, and we continued our way, across the bridge of the La Chaux River, straight on to La Ville Noire and this time, our hunger was satiated at the Biscuiterie Rault, a cassava Biscuit factory. Vanilla, cinnamon, anise or chocolate, all flavors are tasty when they are offered with a cup of local tea, of course. A welcome pause, just in time to evoke the delicacies of Mauritian childhood. The local cassava biscuit reminded me of Proust’s “sponge cake”. 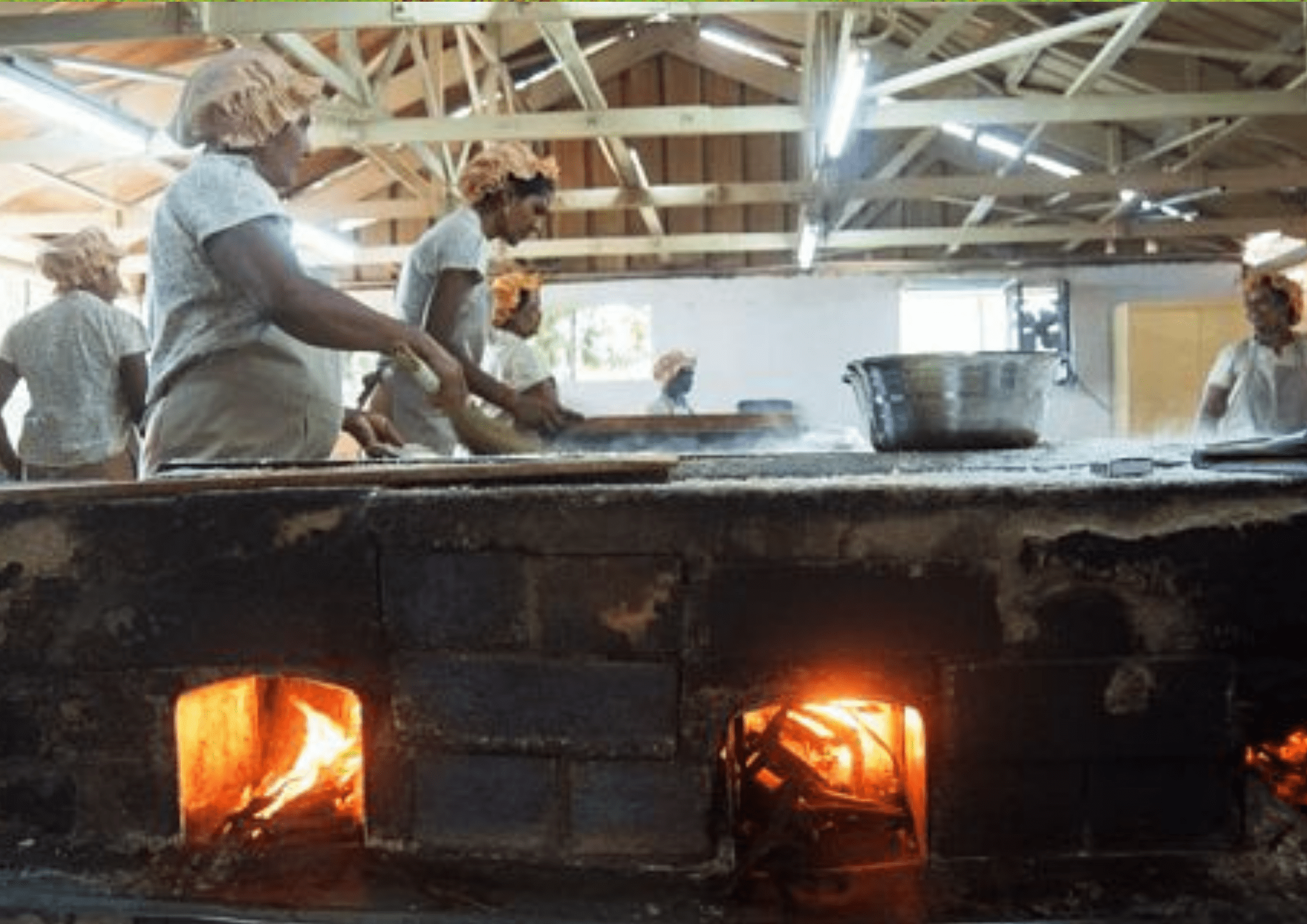 Brocus Point and its cemetery were our following stops as I wanted to see the strange forest that came to life after past victims of epidemics. The story goes as follows: to identify – and most likely to avoid – the spot where bodies were buried during epidemic periods a long, long time ago, trees had been planted. For superstitious reasons, no one had ever dared to cut them down, in fear of stirring up a diseased land. And indeed, right in front of the “traditional” cemetery, we could see rows of tall trees that stood out in the local landscape.

These are my phantoms from the East … and they are beautiful. 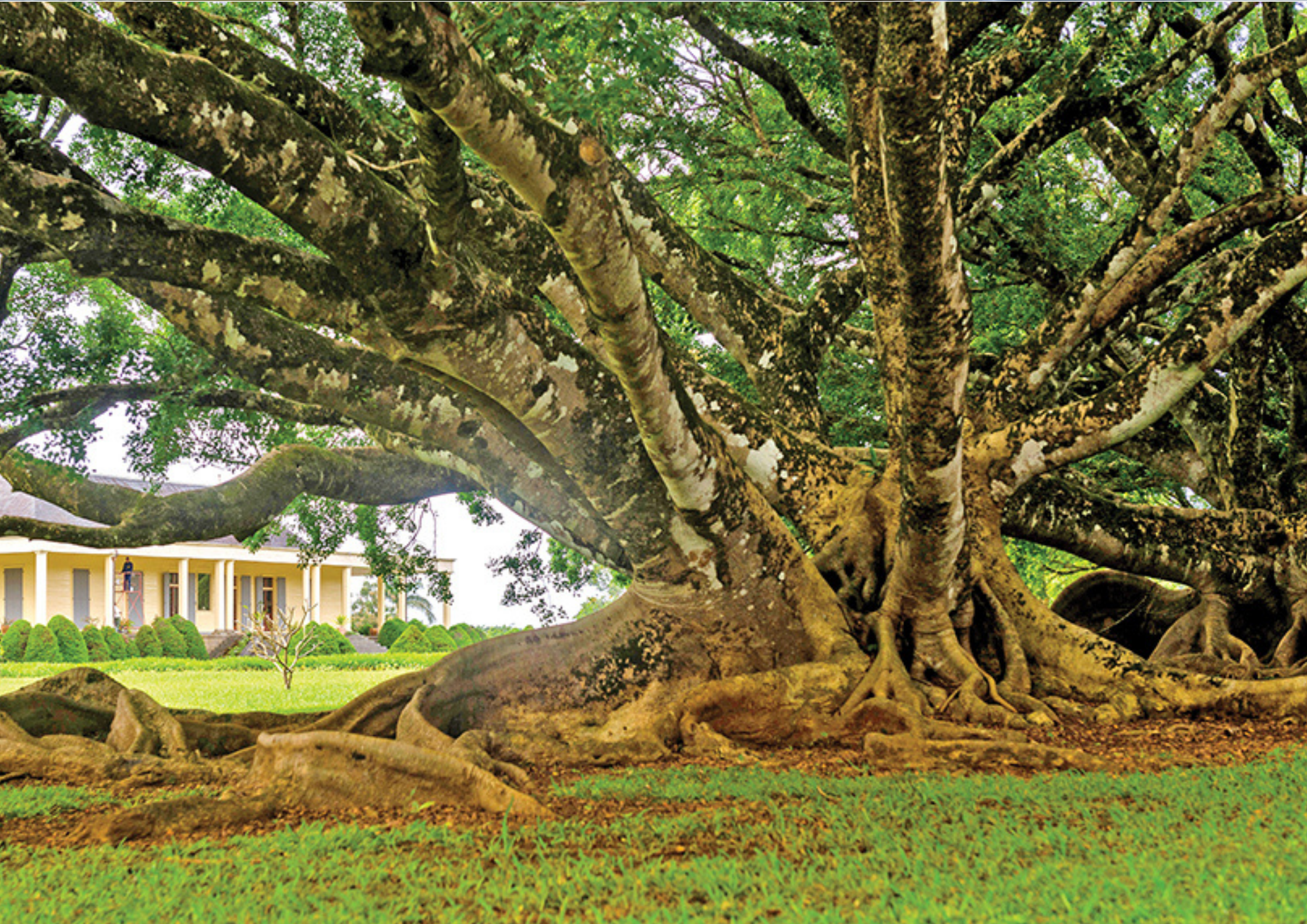 The coastal road across Rivière des Créoles I thought I was familiar with took on a whole new meaning after I received clarifications from my guide: a statue of Virgin Mary, the sole survivor of an old shipwreck and for whom a church overlooking the sea was dedicated; an old platform in the middle of the ocean, used for refueling seaplanes during the war, still stood proudly and loyally. Old reservoirs destroyed by vegetation in the background, and the remains of the first Dutch reinforcements … I had been on this road a hundred times and I never saw what really mattered. My next road trip along this route will be like flipping through the pages of a history book.

A few twists and turns further, we arrived in front of another gate, that of the Chateau de Riche en Eau. The park was green, sparkling and lush. The stone arch which covered the entrance grid was marvelous and reminded me of these fantasy realms where Nature reigns supreme. After a brief glance at the gates of the equally beautiful stables, I promised myself that I would be back to visit the gardens of this beautifully well-kept private property, on one of the rare occasions that it opens its doors to the public.

The trip came to an end after we were back on our way from Ferney to La Falaise Rouge, that we had spotted earlier from Mahébourg. It is in fact a detached piece of cliff that reveals a sharp red slope blending with the green and blue coast shades, but it is also a very peaceful location with a restaurant overlooking the ocean and a garden. Another appointment booked.

The foreigner was overjoyed that evening, and the Mauritian that I also am, is so proud of her land! Mauritius has a lot of fascinating sights to offer and definitely unveils her unique charms to those who can look beyond the beach.

My guide is in fact not a guide by profession, but simply a Mauritian in love with his island and its history. There isn’t a more insightful look on this land than his, and I wholeheartedly thank him for sharing it with me.

Spread the Love: Valentine’s Day
Next

The Weaverbird : A genius architect of Nature