Ganesh Chaturthi – The God of wisdom, happiness and prosperity

My Island, far from the ancient lands, but so soaked with culture and human blooming, is a small piece of land which takes pride in having all religions deeply rooted, all civilisations coexisting and in celebrating the main religious festivals with dignity. Christmas, Easter and The Assumption symbolise the Christian faith; Ramadan, Eid and Bak-Eid witness Muslim enthusiasm and fervour, Buddhism and Confucianism shine in pagodas and China Town, Hinduism is highlighted at Ganga Taloa (Grand Bassin), whilst the Tamils ennoble themselves through the sacrifice of cavadee or walking on burning embers. My island is proud and happy to cherish these spiritual diversities, sign of a limitless mutual respect.

This overview bears testimony to the privileged status enjoyed by the minorities with respect to their religious practices. Even though the festivities may not be held at national level, the fervour of the celebrations is not impacted. Just like the Hindus of Maharashtra, the Marathis to be more precise, a minority which honours Ganesh, its God, with a breath-taking liveliness.

What an outcry! What an outburst! What a delight! For Ganesh who is just a God among a multitude of Gods. If one notes the efforts Marathis put in before the event, it is because Ganesh is the God of wisdom, happiness and prosperity.

He forsakes his Kailash (mounts of Himalaya) to throne above humankind to consider its wishes, requests and prayers. He comes for prosperity and success. After all it is his birthday. Yes, his birthday! Ganesh plies back to his abode at the top of the Himalayas. Hence, one gets ready, one explodes, for Ganesh is among us. We are ready to welcome him, to pray, to adore him and commemorate his birthday, the day of his departure. This is Ganesh Chaturthi. The birthday of a God who has dared to be among us, for our well-being, joy and prosperity.

Well before the event, the Marathis are febrile, cleaning their houses and yards spotlessly, some three weeks, others forty days ahead. One fasts according to one’s belief to please the divine deity. The Mantras (music and praise songs) flood small and large homes alike. Appropriate garments are homemade or secured. Some days before the immersion, a statue of Ganesh is moulded and carved with clay before being fine-tuned artfully with this particular ancestral know-how. Piously, it is placed on a little table for the joy of one and all. 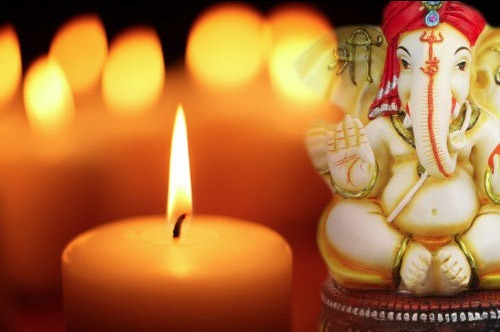 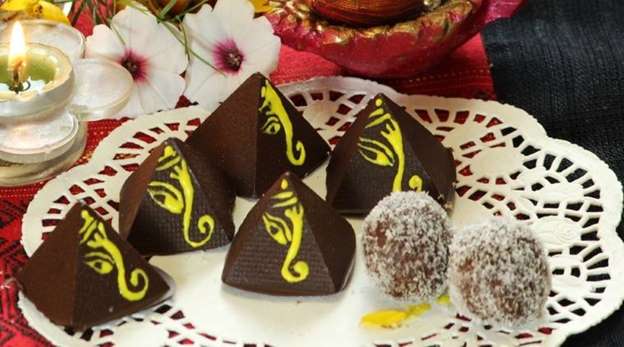 What a joy! An amazing zeal drives the devotees contemplating the divinity who reigns among his disciples. The mandaks (Marathi sweets) dance in the pans whilst a big Lota (copper bowl) containing a perfect coconut surrounded by mango leaves shines so brightly. One will also see sandal paste (from sandalwood), quack grass (a handful of weeds) decorating a copper plate containing a Diya (a heart shaped lamp).

Although this small dot lies in the far end of the ocean, miles away from the holy land of Maharashtra, the home of the Marathi is still filled with the fragrance of this huge region of India. One can feel the freshness in one’s skin and soul as the holiness of the place is enhanced to greet Gunpati. The long awaited time has come! The divine vibration floods the house as soon as the mantras begin with the puja (prayer). Many families call a babajee (priest) to supervise the ceremony whilst it is the duty of the person responsible for the statue to lead the prayers which consist of one hundred and eight names of Gunpati, honouring and blessing him through mantras (praise songs) and puja which reinforce both soul and spirit. Hours after the ritual, the mandak is offered to Ganesh the divine, followed by the devotees blessed by the offerings.

A digression, Ganesh Chaturthi is not an obligation and, additionally, not a tradition but a birthday, organised and planned. One voluntarily invests oneself with joy and gratitude towards the God of abundance and prosperity. One does it with devotion and love, from the bottom of one’s heart to praise him. The rituals last for three or four days but the last night, the one preceding the immersion, one lives like a watchman, accompanied by mantras and pujas, after which, following the sunrise or at mid-day, devotees go to the ocean leading to the heavenly abode of Gunpati. 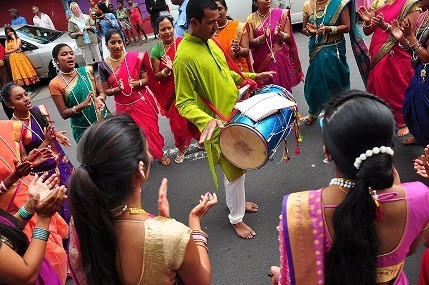 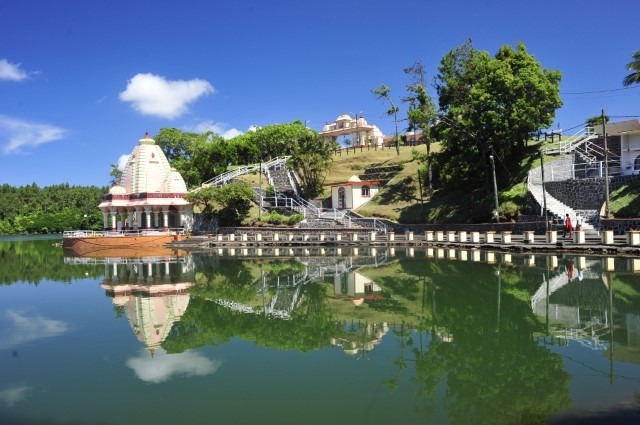 A meeting place is set, preferably a mandiram (Marathi temple) where the priest will join in those honoured for carrying Ganesh, the idol. In the blink of an eye, a big crowd gathers along the road leading to the sacred site. Songs and dances explode in exaltation. Children and grown-ups, adults and onlookers, sound devices roar and religious songs subdue the crowd. Smiles bear testimony to happiness. Jubilation transcends cheerfulness and ecstasy. No one can be insensitive to the clamour which overwhelms both the heart and soul.

‘Gunpati Baba Mauriya’ (Praise to Gunpati) vibrates all along the road under the watchful eyes of passers-by. Furthermore, citizens of different beliefs very often join in, singing and dancing and they are welcomed with open arms.

Now at the beach, the mantras and praise songs intensify and the much more pronounced folkloric rhythms fill the air, the wishes are recited, witnessing Gunpati’s departure, immersed with candour and an unwavering faith. Because for the Marathis, it is not an idol they are immersing but Ganesh himself with all its divinity, returning to his sacred abode after fulfilling the wishes of his disciples.

This is Ganesh Chaturthi. The Birthday of a God who despite his divinity wants to be a human first and foremost, supporting us in our pain and sorrow and sharing our joy and prosperity.

It makes one feel good to live in a small island where mutual respect prevails despite our differences; we can live and participate in the beliefs and traditions of others.

Father Laval - The Apostle of Mauritius
Next